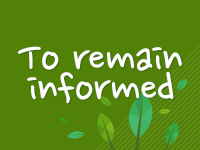 Paused for a moment, without broken hands of a clock

Everywhere, time passes equally. What we have left at the DMZ is not simply scars from the war. We need to turn back time to where dreams become lies, so we can look towards the day of unification. Korea’s dream to be free from Japan became a reality on August 15th1945, when Japan surrendered during World War II, however the joy of freedom didn’t last long. The existing global situation, which was undergoing reform during World War II, was too intense for our people to fight for a sovereign state.

The ‘38th Parallel’ was a temporary line for division of labor within the military operation, to solve Japan’s issues of surrender and disarmament. To solve postwar period problems, military administration was established by the Soviet Union for the North 38th Parallel, and administration for the South by the USA – however the Soviet Union’s thoughts were different. Their goal was to establish a Communist regime at the Korean Peninsula. Strong points which are railroads and roads were built and machine guns were available in excess around the 38th Parallel. Barriers between the North and South started to appear, in turn blocking main railways and roads. After four months of the Soviet Union’s military administration, Communism had been implemented in the North of the 38th Parallel, with Kim Il-sung as leader.

The South of 38th Parallel in those days was without centered politics because the US military government didn’t recognize the existence of Korea’s provisional government, however the opinion amongst the public of South Korea favored a sovereign state over a conjoined government. This opinion strengthened, subsequent to the Cold War, which threatened the authority of the USA to prevent the Soviet Union from monopolizing the Korean Peninsula. In conclusion, a temporary committee of the UN was responsible for the election of a self-governing regime in South Korea. The 38th Parallel became a boundary line and the ROK adopted a democratic government in the South (the Democratic People’s Republic of Korea). The chance to build a unified nation after liberation, disappeared, separating the people and the country.

■ The background of division 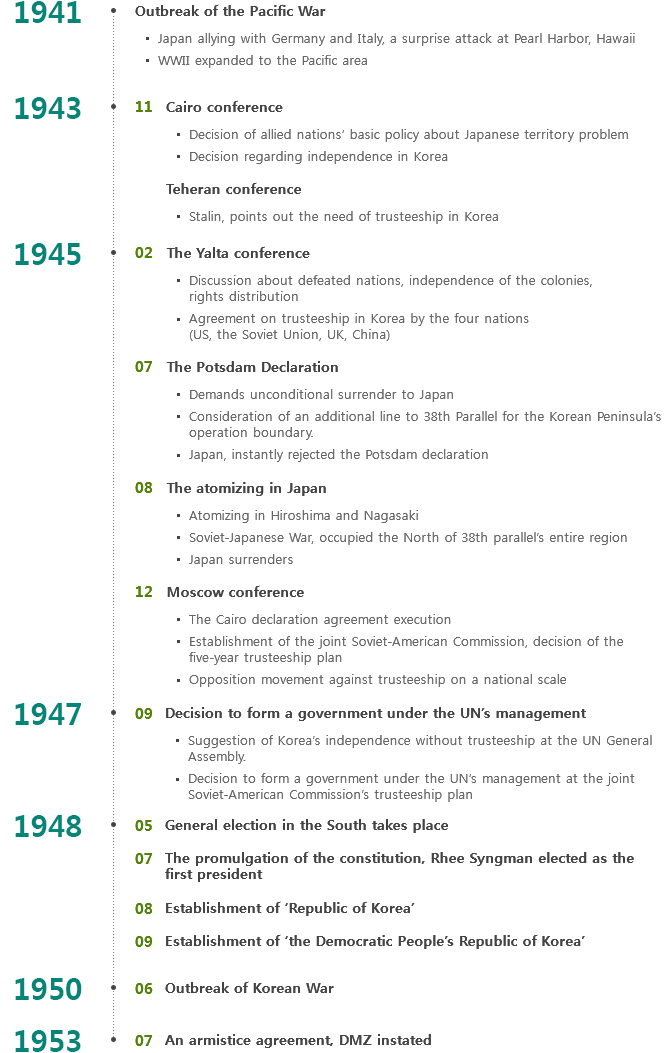 The outbreak of the Korean War, an unforgettable tragedy

On June 25th1950, supported by the Soviet Union, North Korea armed with the newest weapons, impeded the 38th Parallel and invaded South Korea. This was a tragic moment in history - there was a time when Korea fought in unity, as a nation to defeat the Japanese Empire, but instead aimed to annihilate each other. This was the outbreak of the Korean War. The U.N. Security Council declared North Korea’s armed attack as an ‘act of aggression’ and appealed support from neighboring countries. Meanwhile, command authorities were given to the United States for UN military activities in the Korean Peninsula. North Korea’s force in the initial phase was fearful. Seoul collapsed in four days and the front line expanded to Nakdonggang River in the Middle of September. The war strategy changed when the Battle of Incheon succeeded on September 15th1950. The UN forces entered Seoul on Sep 26th, regaining it on the 28th.

When Nation’s force and UN forces crossed over the 38th Parallel towards the North, citizens of South Korea expected unification, however the US thoughts were different. They were concerned that the Soviet Union and the Communist Chinese army would intervene, fearful of the Korean War turning into a combat between powerful nations. The war was ongoing, but our ground forces and air forces were prohibited access over the border into land occupied by the Soviet Union and Chinese. The Communist Chinese army entered the war using a human-wave strategy, which brought the war into a deadlock, leaving the 38th Parallel indeterminate.

‘Maintain the present state near the 38th parallel’ was a restricted war policy initiated by the US. This policy showed indications of a war extension, which brought Malik J, the Soviet Union and UN representatives to recommend ceasefire mid speech at a meeting on June 23rd 1951. Progress towards unification expands northwards as our government opposes ceasefire, however ceasefire negotiations went ahead in Kaesong on July 10th1951. Until the conclusive ceasefire agreement was held on July 27th1953, it was merely the beginning of an ongoing battle between the opposing sides. In the beginning, negotiations progressed smoothly, but inevitably issues arose. Fixing the MDL between both armies caused conflict of interest. The US Army already advanced over the 38th Parallel and insisted to set the MDL alongside both armies’ line of contact, but the Red Army insisted to return the 38th Parallel to the original state. Talks were suspended and the war became intense again. About two months later when ceasefire negotiations resumed at Panmunjeom, the Red Army accepted the UN forces’ opinion and the MDL dispute was resolved.

Soon after, another disagreement arose, this time concerning the repatriation of prisoners of war. Conflicting opinions became intense, which resulted in the suspension of further negotiations. Our government’s position to oppose ceasefire remained strong. The war was already at a loss of many lives and assets couldn’t be separated. An anti-ceasefire protest continued and President Rhee also opposed an armistice. Repeated battles and intensive attacks on the line of defense were consequences to difference in opinion, leading to an agreement of ceasefire. That’s how 3years of an ongoing war ended, and peace, which wasn’t a reality, was assumed in the Korean Peninsula. 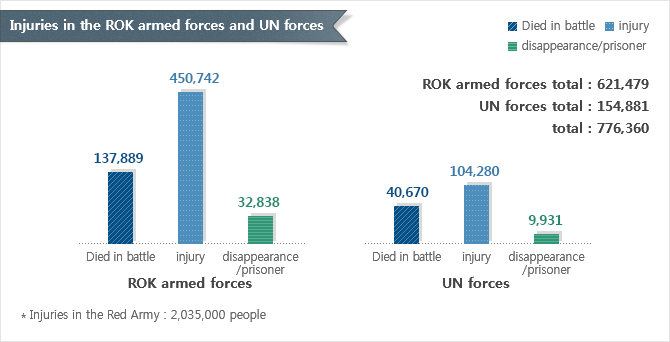 Bury the pain and sow seeds of hope

Three years of war and two years of tedious ceasefire negotiations concluded with the signing of eighteen documents that were prepared by the UN forces and the Red Army forces on July 27th1953. Documents for the ceasefire agreement were written in Korean, English and Chinese. These documents contained contents about the MDL, DMZ and the liberation of the prisoners’ of war. Our mountains and fields sharing the same sky were divided due to documents containing content regarding the separation of the Korean Peninsula. A steady wall of separation now stands in front of us.

An extensive amount of time was taken to reach the realization that a river flows, birds fly high, and animals roam on the land that exists across the barbed-wire fence. Time passes by as we march towards the future with continual change and development. The military tension is still rife, but we cannot leave the DMZ as the familiar ‘unreachable land’. A concerted effort is required to forma unity once again, one can only hope such a time will arise somewhere within this land.